Watch out for some special celebrations in 2020 …

With expressions of interest to form a lapidary club during the 1965 Carnival of Flowers (where the famous rock collection of Wally Gan Timur was on display), the Toowoomba Lapidary Club began on the 8th October 1965 (50th birthday on 8 October 2015).

Then known as the Darling Downs Lithophilic Society, the lapidary club began with 130 members. Clubhouse facilities were in an upstairs room of the old Chandlers Building in Ruthven Street.

In 1972, the Toowoomba Lapidary Club needed larger premises and the opportunity arose to purchase the property at their present location: 4 William Street.

In 1981, the first Gemfest was held at the old showgrounds, where TAFE campus now stands. From 1985, when the Toowoomba Showgrounds relocated to Glenvale, Toowoomba Gemfest was then held at the Centenary Heights High School, where it is currently held to this day.

When lapidary clubs were springing up all over Australia (the first lapidary club opened in Sydney in 1953), the knowledge to facet stones was not available. Like most gem-cutting techniques, it was a very secretive process where skills were passed down from father to son. For example, many of the Crown Jewels of Europe were first cut in cabochon-style, and not faceted. Today these techniques are known worldwide.

Since 1991, the club has offered faceting instruction. A high level of skill has been achieved by many of our club members, five of whom are qualified as judges for faceting competitions. At least three members have won first place in various sections of international faceting competitions, organised by the Australian Facetors’ Guild.

In 1993, the Toowoomba City Council decided to provide a $12,000 ceremonial mace to the University of Southern Queensland. The most successful tender went to a local jeweller (Hay’s Jewellers), and the gemstones decorating the mace were to come from the local area. Three Toowoomba Lapidary Club members (Neville Kleidon, Manuel Pelecanos and Bob Boddington) were commissioned to facet the 40 garnets, nearly all fossicked from Mt Wyangapini near Pittsworth. A 39-carat garnet is on the end of the mace, and it is extremely rare to have one of this size with such internal clarity. 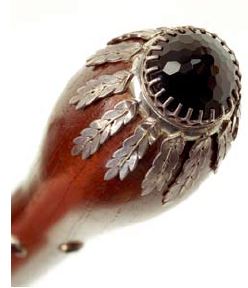 Every Easter, somewhere in Australia, a national gem show, called a GEMBOREE® is organised. In 1996, Toowoomba was chosen as the host city. Held at the showgrounds, this 4-day gem and jewellery expo was acclaimed a resounding success. The Toowoomba Lapidary Club was again involved in the organisation of another national GEMBOREE®, at the Gatton Sports Complex and showgrounds during Easter 2007.

Besides organising Gemfest, an annual event for the public from Toowoomba and surrounding regions to attend, other services requested by schools and organisations include giving talks. One of our gemmologists will visit schools, at the teacher’s request, to give hands-on information sessions about volcanoes, rock formations, fossils, minerals, crystals etc for their Earth Sciences lessons. Other groups like Neighbourhood Watch and 4-wheel drive camping and caravanning expos have requested a guest speaker visit their meetings.  The club has also been invited to put on displays at the U3A Seniors Expo and the Bunnings Father’s Day Family Night.  In the past, this has also included demonstration/ displays at Lions Creative and the Rotary Club’s Hobby n Craft expos.